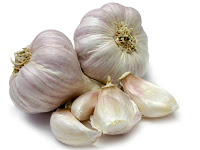 Society in general, have known garlic for seasoning and flavor enhancer in a variety of cuisines. Named garlic, because it was white, bulbous compound layer. Traditionally, garlic is also used as an herb for meyembuhkan disease.

Garlic contains carbohydrates (fructans), essential oils, saponins, flavonoids palitenol, vitamin A, vitamin B, vitamin C, calcium, potassium, iron, carotene, selenium, and organic compounds, which have a sulfur atom. The main content of garlic is allyl sulfur, is efficacious as anti-cholesterol, anti-microbial, anti-diabetic, anti-tumor, anti-hypertensive, and anti-inflammatory.
Various studies, analyze the properties of a mixture of garlic, in the fight against cancer, is allyl sulfur components. These substances can prevent the formation and activation of nitrosamines in the body, also inhibits, carcinogens (cancer-triggering) is aflatoxin, azoxymethane, benzo (a) pyrene.

There are several compounds inhibiting cancer cells, which are both used in the singular, or in combination with other anticancer drugs. Diallyl sulfide, a sulfur-containing garlic, showed inhibitory activity against the growth of some cancer cells, and may also prevent gene mutations, mend damaged DNA structures, stimulate cancer cells to commit suicide (apoptosis).
Other properties of garlic, is as anti-oxidants, reduce swelling (inflammation), mengeluarka toxins from the body, and kill the bacteria Helicobacter pylori, which can lead to various kinds of stomach cancer. To neutralize stew / wkstrak garlic, can mix red and green betel betel, so it's not thick, and can add to the garlic in the treatment of Attack.

a. Use Garlic, singly.

Prepare seven large sized garlic cloves, fresh, and then remove the shell. Wash garlic hinga clean, then cut into small slices. Boil 600 ml of boiling water, and the remaining one-half cup. Filtered boiled water, let stand until warm, then drink this decoction, three times a day. Once the drink, as stengah glass. To reduce the smell of onions, on sat boiling, you can add as many as two pieces of betel leaf, which have been washed, and sliced into small pieces or red betel leaves, in the same way. In order not too thick onion flavor, you can add a teaspoon, pure honey, lime juice and water.

b. Garlic herb with other Medicinal Plants.

Prepare seven cloves of fresh garlic a medium size, cut into small pieces, two red betel leaves, six leaves binahong, rosella flower 10 grams, five grams of black cumin. Wash all ingredients thoroughly, then boiled with three glasses of water (~ 600 ml), to boiling, and the remaining one half gelas.Saring boiled water, then let stand until warm. Drink three times a day, to drink half a glass. In order to better taste, and not too bitter, you can add two teaspoons, pure honey and lemon water.