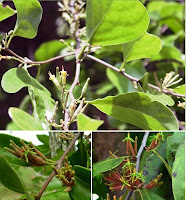 In general, the parasite has been known in the midst of our society, as a nuisance plant another crop. Because of the nature of parasites, parasite commonly grown in some commercial crops, such as tea plants, and fruit trees such as mango, guava and sapodilla.
Beyond the nature of parasites. As weeds, also known as plant parasites that have efficacy in the treatment of cancer. In areas Lembang, West Java, Indonesia, for example, the parasite that grows on the tree of tea, many locals hunted, because it has a high selling price. In fact, the price is very expensive, in the dry season arrives. Farmers local tea gardens, often unable to meet the demand of reservation. From out of town. Tea parasite believed to have superior efficacy, in the fight against cancer, compared to parasites that grow on other plants.

Traditionally, the parasite used sebagaipenghilang pain, cancer, and postpartum care. The leaves and stems of the parasite, containing aklanoida, saponins, flavonoids, and tannins. Its cytotoxicity, against emapat types of cancer cells in manjusia showed quercetin as an anti-cancer most active with IC50 at 35um U251 (human gliobastoma cells).
Active ingredients anti-cancer growing on some tree species are different. As a medicinal plant, parasites, any type have properties as a medicinal plant that is often used with cancer.

a. Use Potions parasite, a single
Parasite chopped stems and leaves, which are as much as 50 grams of dried, wash with running water, and rinse three times to clean and then boiled with 600 ml of water to the boil, until the remaining one-half cup water. Filtered boiled water, let stand until warm. Parasite Drink boiled water, three times a day, half a glass. In order to feel better flavor, mix two teaspoons, pure honey.

b. The use of potion Parasite with other herbs.
Prepare the stems and leaves chopped dried parasites 30 grams, 20 grams of dried mushrooms Lingzi, dried Phaleria 20 grams. Rinse all the ingredients, boiled with 600 ml of water to boiling, until the remaining one-half cup, and let cool until warm. Drink three times a day, to drink half a glass. Combine palm sugar to taste better.